﻿
The Criteria of Takfeer - According to Government Scholars 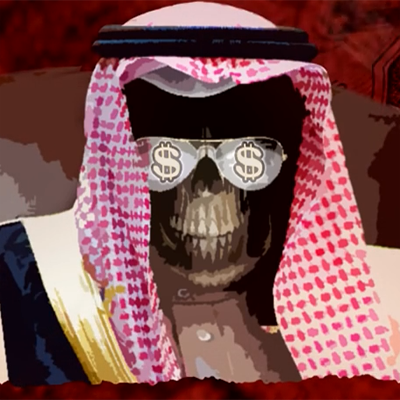 Know, my Muslim brother, that from the most important criteria of Takfeer, which most of the people of knowledge have unfortunately neglected, is that the person who commits any of the nullifiers of Islam should not be from the rulers (those in authority), because making takfeer of the rulers, no matter what nullifier of Islam they had committed, is something which would almost cause the skies to split, the earth to break open and the mountains to fall apart.

Their criterion is built upon two important principles:

The first principle is that every evidence, whether it is from the Qur’an or Hadeeth, which indicates that the rulers have breached one of the tenets of Islam can either be interpreted or abrogated.

And “those who are well-grounded in knowledge” have agreed upon these two principles (above), and it is only those who are 'young in age' with 'foolish dreams' (sufahaa’ al-ahlaam) who are ignorant of these principles.

And the evidence for this criterion (daabit) is from the Qur’an, the legal (shar’i) principles, and the deriving (al-istiqraa’) of evidences.

As for the evidence from the Qur’an, it is Allah’s statement regarding what Fir’awn had said [to his people]:

I show you only that which I see (correct), and I guide you only to the path of right guidance! [Ghafir 40:29]

And one of the foundational principles is that ‘consideration is given to the general meaning of the text and not its specific circumstance’. So this speech, even though the Fir’awn at the time of Musa said it, applies to all of the pharaohs from the rulers of today, since they do not show their people except what they see (correct) and they guide them only to the path of right guidance.

And so, if we make takfeer of them with what is clear from the evidences or consensuses, it would be contrary to the statement of Fir’awn, “…and I guide you only to the path of right guidance!” [as they believe that they are the ones who guide the people, just like Fir’awn], and this is apparent.

As for the proof from the legal (shar’i) principles, it is the well-known shar’i principle which “those who are firmly grounded in knowledge” have agreed upon, which is: “The elders have more understanding and experience.”

And as for the derived proofs, it is apparent through istiqraa’ (the deriving of proofs) that there are consensuses which have been explained regarding some actions that can nullify a person’s Islam. But if the rulers perpetrate any of them [the nullifiers of Islam], then research and investigation suddenly direct us to two opinions [principles] in this issue.

And here are two examples (of the above):

The first is that Ibn Hazm, Ibn Katheer and others have narrated consensus about the shirk of legislating rulings, and how a person becomes an apostate by doing that. However, when the rulers breach this tenet of Islam, then suddenly there appears to be two opinions [principles] regarding this issue.

The second is that Ibn Baz, Ibn Humayd and others have narrated consensus regarding the disbelief of the one who assists the disbelievers against the Muslims, but then when the rulers commit this act of disbelief, suddenly there appears to be two opinions [principles] regarding this matter.

And this is always the general rule [according to government scholars], which you must “bite and hold onto with your molar teeth.”

And know, may Allah bless you, that this criterion [of the government scholars] is not always the general rule, rather it has an important exception and the one who doesn’t recognise it would fall into contradiction and confusion. And the exception is that if the ruler breaches a tenet of Islam, only then would the rule apply. However, when he nullifies one of the tenets of the United Nations, he is no longer infallible, and the rule would no longer apply.

An example of that is Saddam Hussein. When he abided by the laws of the United Nations, then Ba’athism, socialism, nationalism, arbitration laws, and the massacres and slaughtering, and so forth did not matter; rather he was (called) the “Eastern Gatekeeper”, the “Noble Knight” and (even) “Salahudeen”. However, when he breached one of the tenets of the United Nations – and I seek refuge in Allah – when he occupied Kuwait, then the system of being infallible did not apply to him any longer and he was then considered a disbeliever, apostate, Ba’athist, socialist and tyrant! So understand well this exception [of the government preachers].