﻿
Why Has Saudi Arabia Allowed It's Land to Be Used as a Base for the U.S. Military? 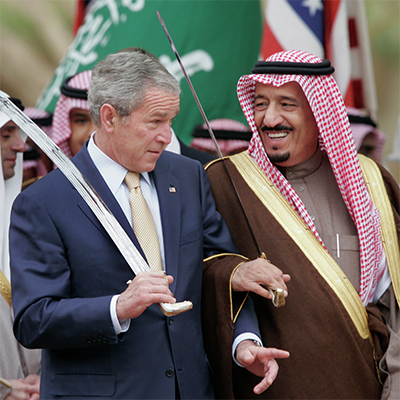 Insha'Allah this email reaches you in the best of health and iman. I was just watching the news and they stated that Saudi Arabia is going to let the US use their land as a base if they should go to war with Iraq. What does this mean for us muslims? Isn't that a bad thing if they let them use their land as a base? I dont know why when i heard this news i burst into tears, i dont know why. How could the holiest place in Islam allow the kuffar into thier land to kill other brothers and sisters? Could you help me understand this? I mean isn't it wrong for them to allow this to happen? If you can please explain this to me, insha'Allah...

The current affairs of Muslims comes as no surprise for Allah (عز وجل) tells us in Surah al-Anfal 8:73,

And those who disbelieve are allies to one another, (and) if you (Muslims of the whole world collectively) do not do so (i.e. become allies, as one united block with one Khalifah), there will be Fitnah (wars, battles, polytheism, etc.) and oppression on earth, and a great mischief and corruption (appearance of polytheism).

From this we know that Allah (عز وجل) continuously warns us that if we are not one in tawheed, there will be fitnah on earth.

Allah has given us many wake-up calls in the past century, including the tragic situations in Palestine, Iraq, Kosovo, Bosnia, Kashmir, Chechnya, Afghanistan, and the list continues. It's quite obvious that our state of affairs is tragic.

At one point in time, the King of Prussia, Frederick II (1740-1786) wore a turban and robe when having his portrait painted. This was so because in those days, it was the Muslim Turks who were honored by the rest of the world. Therefore, he wished to look dignified like the Muslims while posing for his portrait.

But, today, no one wishes to imitate the Muslims, not even our own children.

Looking at some causes for why we stray away, first it is no doubt it is from widespread ignorance of our basic aqeedah, of tawheed, of the oneness of Allah (عز وجل) . Many of us are not taught of the purpose of why we were created in the first place, which is to worship Allah alone. This is very basic, yet if you were to ask many young Muslims in this country, they will tell you "to spread peace" when in fact "attaining peace" is a mere consequence of tawheed.

Second, the people who rule above us are just as guilty as most of the Ummah in vying and competing for wealth. The Prophet (صلى الله عليه وسلم) said (as narrated by Abu Sa'id Al-Khudri),

"The thing I am afraid of most for your sake, is the worldly blessings which Allah will bring forth to you." It was said, "What are the blessings of this world?" The Prophet said, "The pleasures of the world." A man said, "Can the good bring forth evil?" The Prophet kept quiet for a while till we thought that he was being inspired divinely. Then he started removing the sweat from his forehead and said," Where is the questioner?" That man said, "I (am present)." Abu Sa'id added: We thanked the man when the result (of his question) was such. The Prophet said,

Good never brings forth but good. This wealth (of the world) is (like) green and sweet (fruit), and all the vegetation which grows on the bank of a stream either kills or nearly kills the animal that eats too much of it, except the animal that eats the Khadira (a kind of vegetation). Such an animal eats till its stomach is full and then it faces the sun and starts ruminating and then it passes out dung and urine and goes to eat again. This worldly wealth is (like) sweet (fruit), and if a person earns it (the wealth) in a legal way and spends it properly, then it is an excellent helper, and whoever earns it in an illegal way, he will be like the one who eats but is never satisfied. (Bukhari)

Here we also see that the Prophet (صلى الله عليه وسلم) feared for his Ummah what we see today, an abundance of wealth yet a burning hunger for self-gratification.

It has also been narrated that the Prophet (صلى الله عليه وسلم) said:

Two hungry wolves let loose among sheep are not more harmful than a person's craving after wealth and status is to his Deen.

We see manifestations of this "harm" by the actions of the rulers Allah (عز وجل) has placed above us, to the extent of allowing the kuffar to use the very soil our beloved Prophet (صلى الله عليه وسلم) walked on to spill the blood of the Ummah.

Third, al-Wahn. We exchange our after life for this life. Meaning, we fear death not because of our accountability to Allah but because we are frightened of leaving our worldly life, caring nothing about what Allah (عز وجل) has promised us if we were worthy of His Mercy.

Today as you look around we are being literally eaten away like a plate of food, with tyrants inviting each other to delight themselves in shedding our blood, in raping our women and pillaging our honor (what little we have left of it).
But then we have to ask ourselves why? Why has Allah (عز وجل) allowed for these rulers to rule above us. And, the answer all goes back to abandoning tawheed, straying away from Allah and His messenger.

That is so because Allah will never change a condition which He has bestowed on a people until they change what is in their ownselves. And verily, Allah is All-Hearer, All-Knower. [Surah Al-Anfal 8:53]

For each (person), there are angels in succession, before and behind him. They guard him by the Command of Allâh. Verily! Allâh will not change the good condition of a people as long as they do not change their state of goodness themselves. But when Allâh wills a people's punishment, there can be no turning back of it, and they will find besides Him no protector.

From these two ayaat we know that Allah (عز وجل) says He will never change the condition of the people until they change what is in themselves. If we remain on the right path, with the correct aqeedah and carrying out those beliefs through our actions, our good condition will remain. However, we also know that if we stray away, unless we repent and return to Allah, our condition will not be changed.

As long as we are emulating and looking to the enemies of Allah for solutions, and doing everything we can to be like them in every other aspect of our lives, how can we expect Allah to raise us above them? We ourselves are not in harmony with Allah's laws, and yet we wonder why things are going wrong.

In this we have to remember that as on lookers to the onslaught of disbelief and corruption, we will not be spared of Allah's punishment.

And fear the Fitnah (affliction and trial, etc.) which affects not in particular (only) those of you who do wrong (but it may afflict all the good and the bad people), and know that Allâh is Severe in punishment. [Surah Al-Anfal 8:25]

We can also look to the story of Prophet Nuh (عليه السلام) to know that remaining passive to the evil that goes on around will also bring us torment.

Therefore it is evident that those of us who have been enjoying things running smoothly in the dunya are the ones who really need to worry about what is to come. And, Allah knows best.

Many of us wonder what will avail us of victory. Do we need more weapons of mass destruction? Not ultimately, for we know that Rasulullah (صلى الله عليه وسلم) said that the duaa' is the weapon of the believer. Allah (عز وجل) is the one who gives us victory, not our own strength and weapons, and this is evident throughout Muslim history. Also look into the story of Dawud and Jalut in the Qur'an.

So, what is it that will bring us victory? It's really quite simple, but to take it to task is the difficult part for many of us. It comes in many forms, whether it be jihad, or hijrah for the sake of Allah, there is one thread that ties them all, and that is returning to Allah (عز وجل) by gaining the correct understanding of tawheed so that we may be worthy of victory in this life and the Hereafter. In short, if Muslims truly wish for safety from destruction and given victory, then they must change and improve what is in themselves. If we rectify ourselves, then Allah will raise us and rectify our situation.

Lastlly, Allah (عز وجل) always tells us to be hopeful for He (عز وجل) promises in may places in the Qur'an that:

And whosoever takes Allah, His Messenger, and those who have believed, as Protectors, then the party of Allah will be the victorious. [al-Ma'idah 5:56]