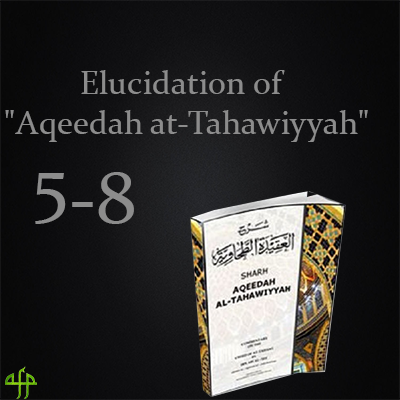 5. He is the Eternal without a beginning and enduring without end.

(These statements are not in any order like the Iman section or the section on refuting other beliefs, and so on. The author chose his statements in different orders. The same applies for the attributes of Allah (عز وجل), some statements are replies to deviants, and some are from the principles of Ahlus-Sunnah.)

1] PROOF
The proof for this attribute is as Allah (عز وجل) said (Huwa al-Awwal wal-Akhir).

Thus, these are the proofs that Allah does not have a beginning and is enduring without an end.

2] QADEEM IS NOT ONE OF ALLAH'S NAMES

The word qadeem means old. Unlike the name of Allah (عز وجل) al-Awwal which means first, the word qadeem is NOT one of Allah's names. This is worth nothing because this is what the proponents of philosophy claim.

Qadeem is not an attribute of Allah. Qadeem is only used to describe the attribute and name of Allah (al-Awwal) which means the first.

Why does the Author use the word Qadeem here?

The author here uses the word Qadeem but restricts it to - "Qadeem, without beginning". Had the author said "Qadeem, old/eternal" then he would have been wrong to say so.
Hence, Qadeem is not a attribute of Allah (عز وجل) nor can it be used alone without adding the words -"without beginning" to it.

5] (QADEEM AND DAEM) ARE DESCRIBED BY AHLUS-SUNNAH AS:

6. He will never perish or come to an end.

And put your trust (O Muhammad) in the Ever Living One Who dies not, and glorify His Praises, and Sufficient is He as the All-Knower of the sins of His slaves. [al-Furqan 25:58]

Yafna and yabeed are the same in meaning. Both are used together because in the Arabic language it is an emphasis, an assurance and affirmation that He will never come to an end.

2] WHY THE AUTHOR CHOSE THIS STATEMENT

a) To add praise to Allah (عز وجل) by showing His might in the fact that He will never perish which helps explain the previous sentence "enduring without an end".

7. Nothing happens except what He wills.

But you cannot will, unless Allah wills. Verily, Allah is Ever All-Knowing, All-Wise. [al-Insan 76:30]

And you will not, unless (it be) that Allah wills, the Lord of the 'Alamin (mankind, jinns and all that exists). [at-Takwir 81:29]

2] THE INTENDED MEANING OF THIS STATEMENT

This proves the will and Qadr (destiny) of Allah (عز وجل). Everything on this universe happens by Allah's will, both what we consider good and bad.

3] REASON FOR CHOOSING THIS STATEMENT

This statement by Imam Tahhawi is a reply to a sect called Qadriyyah, also known as Jabriyyah, Mu'tazilah. They claim that Allah's will was to have people have Iman. It is the independent will of the kaafir to have kufr, that the kaafir creates (yakhluq) his own actions, meaning, that among Allah's creations is that which goes against the will of Allah (عز وجل).

This is showing that things in this universe go against Allah's will and this is nothing but a defamation of Allah (عز وجل).

The two groups he is replying to are:

Those who took partners (in worship) with Allah will say: "If Allah had willed, we would not have taken partners (in worship) with Him, nor would our fathers, and we would not have forbidden anything (against His Will)." Likewise belied those who were before them, (they argued falsely with Allah's Messengers), till they tasted of Our Wrath. Say: "Have you any knowledge (proof) that you can produce before us? Verily, you follow nothing but guess and you do nothing but lie. [al-An'am 6:148]

What is the basic belief of Ahlus-Sunnah in this matter?

The belief of Ahlus-Sunnah is that Allah (عز وجل) created the action but the human being does not get judged by the creation but by the doing of it and choice he made.

Every good and bad/evil creation is under Allah's will.

4] THESE GROUPS WENT ASTRAY BECAUSE THEY DID NOT UNDERSTAND THE TWO TYPES OF WILLS:

To help shed more light on this matter you will need to know the will of Allah (عز وجل) is two kinds:

Allah (عز وجل) may not be pleased with it or like it (la yahubuh wala yardah) but it falls under His will for a wisdom only Allah (عز وجل) knows, like kufr, disputes, and so on. He created the good and bad and said He (عز وجل) likes the good and despises the bad.

Allah (عز وجل) creates the good for a wisdom and that which we think is bad and evil for a wisdom. For instance, the point of creating evil has a wisdom behind it. It has a significant function such as testing people, separating the truthful from falsehood, to reward upon the deeds, to punish on the sins. In fact, Ibn al Qayyim lists 33 benefits from the creation of Shaytan.

And whomsoever Allah wills to guide, He opens his breast to Islam, and whomsoever He wills to send astray, He makes his breast closed and constricted, as if he is climbing up to the sky. Thus Allah puts the wrath on those who believe not. [al-An'am 6:125]

And my advice will not profit you, even if I wish to give you good counsel, if Allah's Will is to keep you astray. He is your Lord! and to Him you shall return. [Hud 11:34]

Those Messengers! We preferred some to others; to some of them Allah spoke (directly); others He raised to degrees (of honour); and to 'Iesa (Jesus), the son of Maryam (Mary), We gave clear proofs and evidences, and supported him with Ruh-ul-Qudus [Jibrael (Gabriel)]. If Allah had willed, succeeding generations would not have fought against each other, after clear Verses of Allah had come to them, but they differed - some of them believed and others disbelieved. If Allah had willed, they would not have fought against one another, but Allah does what He likes. [al-Baqarah 2:256]

...Allah intends for you ease, and He does not want to make things difficult for you. (He wants that you) must complete the same number (of days), and that you must magnify Allah [i.e. to say Takbir (Allahu-Akbar; Allah is the Most Great) on seeing the crescent of the months of Ramadan and Shawwal] for having guided you so that you may be grateful to Him. [al-Baqarah 2:185]

Allah wishes to make clear (what is lawful and what is unlawful) to you, and to show you the ways of those before you, and accept your repentance, and Allah is All Knowing, All Wise. [an-Nisa 4:26]

And Allah would turn to you in mercy; but those who follow vain desires would have you go tremendously astray. [an-Nisa 4:27]

Allah would make the burden light for you, for man was created weak. [an-Nisa 4:28]

...Allah does not want to place you in difficulty, but He wants to purify you, and to complete His Favour on you that you may be thankful. [al-Ma'idah 5:6]

...Allah wishes only to remove ar-Rijs (evil deeds and sins, etc.) from you, O members of the family (of the Prophet), and to purify you with a thorough purification. [al-Ahzab 33:33]

5] THE DIFFERENCE BETWEEN THE TWO WILLS OF ALLAH

b) Iradah Qawniyyah may be created for other than itself, like creation of devil. That could have been created for many good reasons such as repentance, patient, mujahidat nafs and istighfar.
Iradah Shar'iah was created for itself because Allah (عز وجل) wants obedience and liked it and is pleased with it for itself.

c) Iradah Qawniyyah must happen. Allah (عز وجل) wants something it must happen like death, life or like that. Iradah Shar'iah does not necessarily have to happen (could happen and could not)
If Iradah Shar'iah was a must to happen then everyone would muslim. There would be no sinners, repenters, praying... etc.

d) Both wills of Allah (عز وجل) (Shar'iah and Qawniyyah) combine in one who is obedient.

One who prays has had both wills by his prayer.
Prayer is liked by Allah (عز وجل), He ordered it, and He liked it and is please with it. This is from Iradah Shar'iah. From Iradah Qawniyyah, is that it happened.

Belief in Iradah Qawniyyah is alone in a kaafir… By it happening shows it is under Allah (عز وجل)'s Will because nothing happens except by the Will of Allah (عز وجل). The fact that it is not liked and does not please Allah (عز وجل) shows it as Qawniyyah and not Shar'iah .

Shar'iah happens alone in believing of kaafir (who did not believe yet), and obedience of sinner (who did not stop yet). These are Shar'iah in that Allah (عز وجل) likes it and is pleased with it, however it did not happen so it is not Qawniyyah.

8. No imagination can conceive of Him and no understanding can comprehend Him.

He (Allah) knows what happens to them (His creatures) in this world, and what will happen to them (in the Hereafter), and they will never compass anything of His Knowledge. [Ta-Ha 20:110]

This does not mean Allah (عز وجل) is not known to us, rather we know of Allah (عز وجل) and have knowledge of him. But the point is we cannot with our limited mentality comprehend Him fully knowledge wise, or imagine him mentally because He is supreme more than anything.