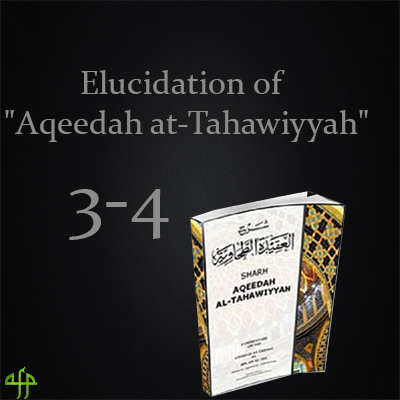 3. There is nothing that can overwhelm Him.

Qadeer Means exaggeration and outmost peak in power and capability to do things. The Qudrah = Power of Allah (عز وجل) cannot be hindered by anything. If he wants something he says be and it's done. This is the proof that Allah (عز وجل) has all the power to do all things.

It is specified by his will here because "gathering" necessitates a certain time in the future, and Allah (عز وجل) is capable of gathering the people of the sky and the earth at that time or anytime.

"Have they not traveled in the land, and seen what was the end of those before them, and they were superior to them in power? Allâh is not such that anything in the heavens or in the earth escapes Him. Verily, He is AllKnowing, AllOmnipotent." [Fatir 35:44]

Yaooduh means it is not difficult for him nor is it too much for him to maintain and preserve the sky and earth.

When Allah (عز وجل) denies an attribute of himself, it is obligatory upon us to affirm the complete and total opposite to Allah (عز وجل). For example:

1. When Allah (عز وجل) says: "Nothing can overcome Allah."
Then, we have to affirm its opposite this meaning, Allah has full power.

In this ayah Allah mentions He is al-hayy, an affirmation of himself, thus it is upon us to affirm that Allah does not die.

"Those who disbelieve say: "The Hour will not come to us." Say: "Yes, by my Lord, it will come to you." (Allâh, He is) the AllKnower of the unseen, not even the weight of an atom (or a small ant) or less than that or greater, escapes from His Knowledge in the heavens or in the earth, but it is in a Clear Book (al-Lawh al-Mahfûz)." [Saba' 34:3]

"And indeed We created the heavens and the earth and all between them in six Days and nothing of fatigue touched Us." [Qaf 50:38]

This proves the full power of Allah (عز وجل).

"No vision can grasp Him, but His Grasp is over all vision. He is the Most Subtle and Courteous, Well Acquainted with all things." [Al-An'am 6:103]

This shows Allah's supremacy and his majestic honor.

Those who Deny the attributes of Allah

Proving attributes to Allah (عز وجل) is dealt with in depth and detail in the Qur'an, while, the denial of attributes comes in general and not in detail.

However, the mentality of the proponents of Philosophy is the opposite of this. They say Allah (عز وجل) is not a body, not a shade, not a picture, not flesh, not blood, not color, not smell, not testable, not of coldness and hotness, not of height, not of width, he is not of directions, not of right, not of left, not of front, …etc

By denying the attributes of Allah's creation, they arrive at their false conclusion of "what Allah is." This is from falsehood for two reasons:

(1) because they are lowering Allah with His trivial creations, and to even place Allah in the same category of these attributes is an outright disrespect. This is the speech of the Mu'tazilah. The fact is, the absence of a certain quality does not indicated absolute perfection. A sincere heart would be able to distinguish why Allah does not specifically go into detail that for example, he is not an apple, simply because how could we even think for one second that Allah is that?

(2) The method in the Qur'an by which Allah describes Himself is such that He denied His attributes in general and specifically gave his attributes.

Again, the Mu'tazilah believe in the denial of attributes more than the affirmation of Allah's attributes and this is not the method of the Qur'an proven in what Allah (عز وجل) says:

Likewise, it is important to note that there are attributes of Allah (عز وجل) which we do not know. The proof is evident in the the words of the prophet ( صلى الله عليه و سلم) in his dua'a for anxiety and sorrow (hisnul muslim page 55, #116):

"Or you (Allah) have preserved in the knowledge of the unseen with you.."

Therefore, the author made no mistake by saying nothing can overcome Allah because Allah (عز وجل) said in the Qur'an:

"Nothing at all can overcome Allah."

Being overcome can be caused by both (a) lack of knowledge and (b) lack of power. Neither of these two exist with Allah because Allah (عز وجل) knows every element and every tiny particle of element.

The people disbelieved when the Prophets told them of this tawheed. Thus, it is very important to worship Allah (عز وجل) with knowledge. Allah (عز وجل) told us of Himself so we know His rights upon us. Tawheed ar-Rububiyyah and Tawheed al-Asma' was Sifat are the tools, and Tawheed Uloohiyyah is the goal by declaring that Allah is the Creator, ar-Razzak (Provider).

- The Quraysh disbelieved in this Tawheed.

"Nay, they wonder that there has come to them a warner (Muhammad) from among themselves. So the disbelievers say: 'This is a strange thing!'" [Qaf 50:2]

Just as the Pharaoh denied this same tawheed to Musa (alayh salam):

The Quraysh also responded to this tawheed in the same manner:

"But the chiefs of those who disbelieved among his people said: 'He is no more than a human being like you, he seeks to make himself superior to you. Had Allâh willed, He surely could have sent down angels; never did we hear such a thing among our fathers of old.'" [Al-Mu'minun 23:24]

The meaning of la ilah illa Allah is to be totally submissive to Allah (عز وجل) in our worship. The Quraysh knew the meaning of this but they rejected it.

- Then, came the proponents of philosophy and the grave worshippers.

They say la ilah illah Allah (عز وجل) but do not know what it truly means. Some even interpret it as tawheed ar-Rububiyyah.Imam Muhammad bin Abdul-Wahhab said in Kashf ash-Shubuhat,

"La ilaha illah Allah means no one is worthy of worship but Allah."

- This tawheed is evident all throughout the Qur'an.

"Say (O Muhammad): "O people of the Scripture (Jews and Christians): Come to a word that is just between us and you, that we worship none but Allâh, and that we associate no partners with Him, and that none of us shall take others as lords besides Allâh. Then, if they turn away, say: "Bear witness that we are Muslims."
[Aali Imran 3:64]

- Watch out from shirk!! Or this tawheed will be invalidated

- Kuffar, mushrikeen and munafikeen went astray in this tawheed.

- You need to know this tawheed and its opposite.

The danger of committing shirk:

Why do we Study Shirk?

"O my Lord! They have indeed led astray many among mankind. But whoso follows me, he verily is of me. And whoso disobeys me, - still You are indeed Oft-Forgiving, Most Merciful." [Ibrahim 14:36]

The Prophet Ibrahim was an ummah by himself , he was a mountain, an ummah against his people by destroying the statues.

Again, we study shirk in order to fear from committing it and to ask Allah for protection from it. The Prophet Ibrahim was hanifan, far from shirk and on tawheed and Allah (عز وجل) says about him:

"And when Ibrahim said: My Lord! Make safe this territory, and preserve me and my sons from serving idols (shirk)." [Ibrahim 14:35]

"Who can be secured of shirk after this verse!?!"

"Islam will be stripped layer by layer if we don't know Jahiliyyah (ie shirk and its consequences)."

The Sahabah who knew shirk and all its evil saw it in front of them thus they did not fall into it as we might be proned to do today because we do not see it as being apparent. An example today would be those who make tawaf around the graves.