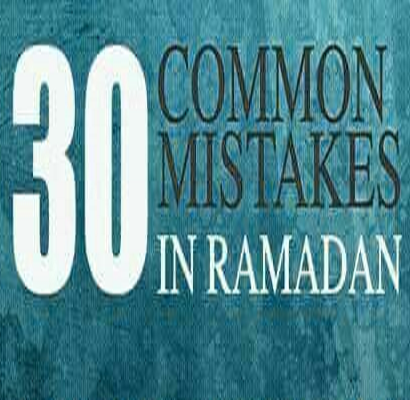 The list was taken from Shaykh Ahmad's Fiqh of Ramadan class.

1) Focusing on food; to the extent that people begin to worry about eating more then actually fasting. This also goes along with spending tons of money on iftars even though a person does not need to eat that much food.

2) Making suhur way before fajr. Some people eat suhur a few hours after taraweeh or isha salah, this is wrong. It should be eaten closer to the time of fajr.

3) People don't make niyyah (intentions) to fast for Ramadan. This is something in the heart and does not need to be verbal. Also it only needs to be done once, at the beginning of Ramadan and not every single day.

4) If you find out late that Ramadan started, you should stop eating and fast for that day, making that day up after Ramadan/Eid ends.

5) Many people don't think you pray taraweeh on the first night of Ramadan (such as tonight). They believe you pray it after the first day you actually fast. They forget that the Islamic calender runs on the moon, maghrib is the start of the new day.

6) Many people believe if you eat or drink on accident this breaks your fast. This is false, if you do this on accident then you continue fasting and do not need to make up the day.

7) Some people take the opinion that if they see someone eating or drinking they should not remind the person that he/she is fasting. According to Shaykh Bin Baz (رحمه الله), this is incorrect and it is an order from Allah for us to ordain the good and forbid the evil. Thus we tell the person, because we are forbidding the evil this way.

8) Many sisters believe they cannot use henna while fasting. This is incorrect, they are allowed to use it during Ramadan.

9) Some people believe when you are cooking you cannot taste the food to see if it has the right spices/flavors. This is false, and allowed in Islam as long as the person cooking is not eating the food. Rather they can taste it to see if it needs salt, or more spices.

11) Some people make the fajr adhan early. They do this so people will stop eating before fajr and not invalidate their fast. This is wrong and something we should not do.

12) Some people make the maghrib adhan late. They do this so people will start eating late, just incase maghrib has not come in yet. This too is wrong and we should not do this.

13) Many many people believe you cannot have intercourse with your spouse during the whole month of Ramadan. This is false, you cannot do this only during the times when you are fasting. Between maghrib and fajr it is permissable to do.

14) Many women believe that if their period has just ended and they did not make ghusl, they cannot fast that day (considering their period ended at night, and they went to bed without ghusl, waking up without having a chance to make it). This is incorrect, if a women has not made ghusl she can still fast.

15) Many men believe that if he has had intercourse with his wife and did not make ghusl (similar to the above) then he cannot fast the next morning. This is also incorrect, for he can fast even if he has not made ghusl.

16) Some people pray dhuhr and asr prayers together during Ramadan. (mainly in Arab countries) This is incorrect and should be avoided.

17) Some people believe you cannot eat until the muadhin is done calling the maghrib adhan. This is incorrect, as soon as he starts a person can break their fast.

18) Many people don't take advantage of making dua' before they break their fast. This is one of the three times when Allah accepts a person dua'.

19) Many people make the mistake of spending the later part of Ramadan prepairing for Eid, neglecting Ramadan. This is incorrect and these people lose the concept of what Ramadan is about.

20) Many parents do not let their children fast during Ramadan (young children). This is somehting counter productive to a child. By allowing him to fast he will grow up to know he must do this act.

21) Many people think Ramadan is just about not eating and forget about controling their tempers and watching what they say. In actuality we are supposed to control our tempers and mouthes even more during Ramadan.

22) People often waste their time during Ramadan. They go to sleep during the day and get nothing done. We should be taking advantage of this blessed month by doing extra ibadat.

23) Some people don't go on trips or travel during Ramadan. They think they have to break their fast when traveling. This is actually optional, if you want to break your fast while traveling you can (with making it up later), and if you don't you can continue fasting.

24) Many people who are able don't make i'tikaf at the masjid. We should take advantage of our good health and spend lots of time at the masjid, expecially the last 10 days of Ramadan.

25) Some people believe they cannot cut their hair or nails during Ramadan. This is also false.

27) Some people say you cannot use scented oils or perfumes during Ramadan. This too is false.

28) Some people believe bleeding breaks the fast. This is not true.

29) Some people believe if you throw up on accident it breaks your fast. This is not true, however if you do it intentionally it does.

30) Some people think you cannot put water in your nose and mouth during wudu' in Ramadan. This too is incorrect.