﻿
Da'wah in the West 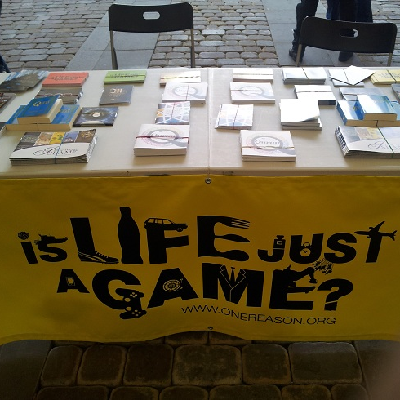 All praise is due to Allah, and may Salah and Salam be upon the Messenger of Allah, to proceed:

Know, my Muslim brother, that from the principles of the religion of Islam is disbelieving in the Taghut, and this is half of tawheed; its other half being belief in Allah, as Allah the Most High says:

...Whoever disbelieves in Taghut and believes in Allah, then he has grasped the most trustworthy handhold that will never break... [al-Baqarah 2:256]

And verily, We have sent among every Ummah (community, nation) a Messenger (proclaiming): "Worship Allah (Alone), and avoid (or keep away from) Taghut (all false deities, etc.i. e. do not worship Taghut besides Allah)."... [an-Nahl 16:36]

And from disbelief in the Taghut is: declaring (ones) disavowal from Kufr and its people, and hating them, and having enmity towards them, as Allah the Most High says:

Indeed there has been an excellent example for you in Ibrahim (Abraham) and those with him, when they said to their people: "Verily, we are free from you and whatever you worship besides Allah, we have rejected you, and there has started between us and you, hostility and hatred for ever, until you believe in Allah Alone,"... [al-Mumtahinah 60:4]

For Allah has ordered us to follow in the way of Ibrahim and those who were with him, as they declared Bara’ah (innocence, disavowal) from the Mushrikeen and what they worship besides Allah, and al-Khalil (Ibrahim) said: “I am free from what you worship, except the One who created me. Indeed He shall guide me,” and having Bara’ah is opposite of allegiance, and the foundation of Bara’ah is hatred, and the foundation of allegiance is love, and this is because the reality of tawheed is to not love except Allah, and to love what Allah loves, thus he doesn’t love except for Allah, and does not hate except for Allah.

The First Category: If the Muslim is capable of openly declaring his religion, as well as declaring publicly his disbelief and rejection of the Taghut, then it is permissible for him to reside there, and if he is a public caller (daa’i) to Allah whilst living between Kuffar, then it may even be praiseworthy and recommended for him to reside there, and this was the condition of the Prophets when they lived amongst their people.

The Third Category: If he is unable to openly declare his religion, and is unable to migrate, then he is from the weak excused ones, but he must refrain from interacting with the Kuffar and mixing with them as much as possible. And, all this has been explained elsewhere.

For this reason, it is obligatory upon those Muslims who reside in the land of the Kuffar (Dar al-Kufr) to actualise the Millah of Ibrahim (عليه السلام) by declaring Bara’ah from the Kuffar and their religion, and to openly show them hatred and enmity. However, I wish to make two issues related to this matter clear;

The First Issue: Actualising the Millah of Ibrahim does not mean leaving calling the Kuffar to Islam in a nice manner, for the Messenger (ﷺ) was open to the Kuffar from his people in his declaration of their Kufr, and his enmity and hatred towards them, and this did not prevent him (ﷺ) from calling them to Islam by softness, mildness, and with good reminders. In this matter two types of people have fallen into misguidance,

The Second Issue: The actualisation of the Millah of Ibrahim does not mean being treacherous to the Kuffar or cheating them or their wealth if they give a contract of passage (or safety) to the Muslim, for the Muslim, if he is granted a contract of protection and passage by way of an agreed upon contract with the kaafir, even if only by way of custom, then it becomes prohibited on him to be treacherous or deceive them.

I ask Allah, the Glorified the Most High to forgive the ones who wrote, translated, published and read it from amongst the Muslims, and I ask Him the Glorified to help us all to that which He loves and is pleased with, and to grant us sincerity, and to accept from our actions, and to keep us firm until we meet Him, and may Salah and Salam be upon our Messenger Muhammad, and upon his family and Companions.