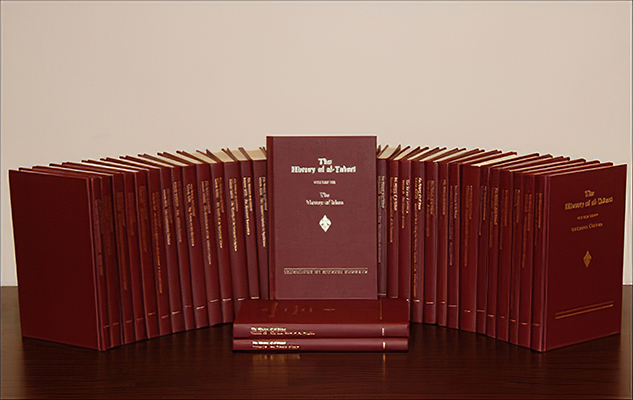 Tareekh ar-Rusul wa'l-Muluk (Annals of the Apostles and Kings) by Abu Ja'far Muhammad bin Jarir at-Tabari (839-923), is by common consent the most important universal history produced in the world of Islam.

It is divided here in 40 Volumes (Including Index) each of which covers about two hundred pages of the original Arabic text.

Imam at-Tabari spent 12 years writing this encyclopaedia on Islamic history. His job was not easy for he had to collect and compile the material from different sources. He had to rely on oral reports as well to complete his encyclopedia. His encyclopedia, 'Annals of the Apostles and Kings', chronicled the History of Islam year by year; an attempt to categorize history from creation till the year 915 A.C. By the time he had finished his work, he had gathered all the historical traditions of the Arabs in his voluminous work. The Muslim world was not slow in showing its appreciation, and this work became more famous than his Commentary of the Holy Qur'an, for there was no other works like that in existence at that time.

It is reported that there were at least 20 copies of his encyclopedia in all great libraries in the Muslim world of those days. Hundreds of copyists earned their living copying his work for use of individuals and libraries. Many of his original works were lost over the passage of time. It was only in the end of the last century that modern scholars pieced together his work so that it could be studied by students in modern times.