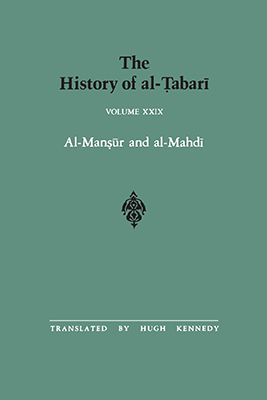 This volume opens when the caliph al-Mansur has just defeated the rebellion of Muhammad the Pure Soul in 145/762-3 and is now securely established in power. The main concerns of the remaining thirteen years of his reign are the building of his new capital at Baghdad, on which al-Tabari's text contains details not previously published in English, and his efforts to have his nephew 'Isa b. Musa replaced as heir apparent by his own son Muhammad al-Mahdi, a maneuver that required all his political skills.

The circumstances of al-Mansur's death in 158/775 are described in vivid detail, and this section is followed by a series of anecdotes, some serious, some humorous, most vivid and lively, that illustrate his character and habits.

The last section of the volume describes the reign of al-Mahdi, more pious than his father but also more liberal and open-handed. Along with routine administration, space is devoted to the bizarre intrigues that accompanied the rise and fall of the vizier Ya'qub b. Dawud and the mysterious circumstances of the caliph's own death in 169/785, followed by a short collection of character stories. In addition, the volume also contains important information about warfare on the Byzantine frontier and in Khurasan.