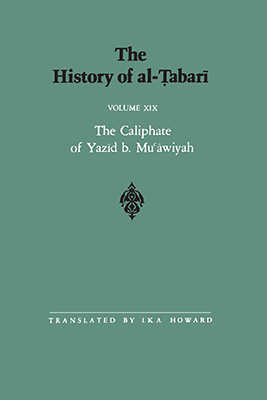 This volume deals with the caliphate of Yazid. Yazid was not accepted as a legitimate caliph by many of the leading Muslims of the time, and, therefore, al-Tabari has concentrated his account of Yazid's caliphate almost entirely on the opposition to him. This opposition had its leadership in two of the leading Islamic figures of the time, al-Husayn, the son of the caliph 'Ali, and Ibn al-Zubayr, a leading Muslim who felt that he had had some claims to the caliphate himself. The first revolt was led by al-Husayn. This revolt, although ineffectual in military terms, is very important for the history of Islam, as al-Husayn came to be regarded by Shi'ite Muslims as the martyred imam; his martyrdom is still commemorated every year by them.

In his account al-Tabari has preserved for us some of the earliest historical writing on the subject. The amount of space he devotes to this event shows the importance it had already assumed by his own time. The second revolt, that of Ibn al-Zubayr, was much more serious in immediate terms. The revolt or civil war can be divided into two stages. This volume covers the first stage, ending with the timely death of Yazid, which saved Ibn al-Zubayr from defeat.