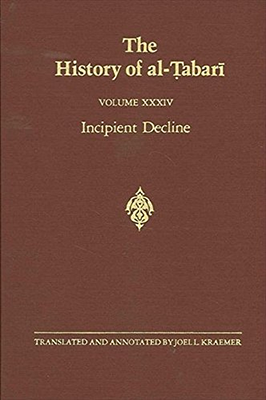 The events described in this volume took place during al-Tabari's own time. Al-Tabari was thus writing "contemporary history," and his narrative, often based on first-hand reports, is drawn in vivid and arresting detail. The volume portrays the summit of "the Samarra period," following al-Mu'tasim's transfer of the 'Abbasid capital upstream from Baghdad to Samarra.

Three caliphs are portrayed in this volume: al-Mu'tasim's son and successor, al-Wathiq; al-Wathiq's brother al-Mutawakkil; and al-Mutawakkil's son al-Muntasir. At this time the 'Abbasid caliphs came under the dominant influence of the Turkish military elite. The crowning example of Turkish power and 'Abbasid frailty was the dramatic assassination of al-Mutawakkil by Turkish officers within the precincts of his own palace. The Turks were afterward not only instrumental in raising al-Muntasir the caliphate, they also forced him to depose his two brothers as heirs apparent. Finally, they had al-Muntasir himself killed.

During the period of al-Wathiq and al-Mutawakkil, insurrections erupted in the center of the empire, and serious revolts broke out in distant provinces, including Africa and Armenia. The Byzantine raids on Damietta and Samosata were memorable events, and periodic Muslim forays were made into Byzantine territory. Prisoner exchanges between Muslims and Byzantines are reported in engaging detail on the basis of eyewitness testimony. The report of a prisoner release by a Shi'ite emissary to the Byzantine emperor contains a charming description of his visit to Constantinople and his audience with Michael III.