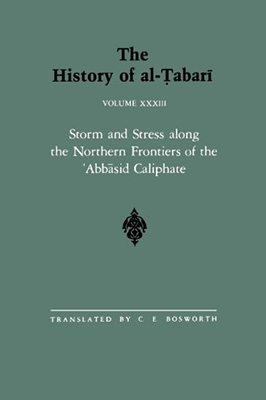 This section of al-Tabari's History covers the eight-year reign of al-Mu'tasim (833-42), immediately following the reign of his elder brother al-Ma'mun, when the Islamic caliphate was once more united after the civil strife and violence of the second decade of the ninth century A.D. Al-Mu'tasim's reign is notable for the transfer of the administrative capital of the caliphate from Baghdad north to the military settlement of Samarra on the Tigris, where it was to remain for some 60 years. This move meant a significant increase in the caliphs' dependence on their Turkish slave guards. Al-Mu'tasim's reign was also marked by periods of intense military activity along the northern fringes of the Islamic lands: against the Byzantines in Anatolia; against the sectarian Babak and his followers--the "wearers of red," the Khurramiyyah--in northwestern Persia; and against the politically ambitious local prince Mazyar in the Caspian provinces of Persia. These episodes take up the greater part of al-Tabari's account of al-Mu'tasim's reign, and he has provided graphic and detailed narratives of the respective campaigns, including valuable details on military organization and tactics during this period.