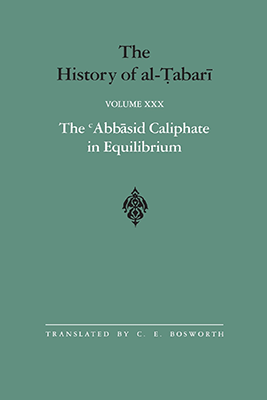 This volume of al-Tabari's History covers nearly a quarter of a century, and after covering the very brief caliphate of al-Hadi, concentrates on that of Harun al-Rashid. During these years, the caliphate was in a state of balance with its external foes; the great enemy, Christian Byzantium, was regarded with respect by the Muslims, and the two great powers of the Near East treated each other essentially as equals, while the Caucasian and Central Asian frontiers were held against pressure from the Turkish peoples of Inner Eurasia. The main stresses were internal, including Shi'ite risings on behalf of the excluded house of 'Ali, and revolts by the radical equalitarian Kharijites; but none of these was serious enough to affect the basic stability of the caliphate.

Harun al-Rashid's caliphate has acquired in the West, under the influence of a misleading picture from the Arabian Nights, a glowing image as a golden age of Islamic culture and letters stemming from the Caliph's patronage of the exponents of these arts and sciences. In light of the picture of the Caliph which emerges from al-Tabari's pages, however, this image seems to be distinctly exaggerated. Al-Rashid himself does not exhibit any notable signs of administrative competence, military leadership or intellectual interests beyond those which convention demanded of a ruler. For much of his reign, he left the business of government to the capable viziers of the Barmakid family--the account of whose spectacular fall from power forms one of the most dramatic features of al-Tabari's narratives here--and his decision to divide the Islamic empire after his death between his sons was to lead subsequently to a disastrous civil war. Nevertheless, al-Tabari's story is full of interesting sidelights on the lives of those involved in the court circle of the time and on the motivations which impelled medieval Muslims to seek precarious careers there.