﻿
A Benefit from Prison - When They Turn Their Backs on You! 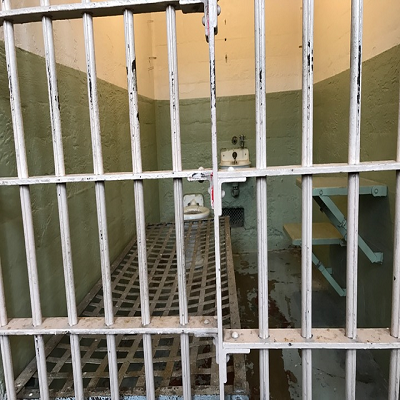 An elderly man who was in one of the many prisons I’ve resided in the past decade, opened his heart to me, telling me how prominent he was in his community and throughout the states. He sat in agony because the hundreds or rather thousands that he extended his arms to, had all turned away from him in his time of need. He was alone and hurt and overwhelmed with worries. His family was unable to maintain their house due to tremendous financial hardships. With a feeling of helplessness, he turned to his old lifelong friends — the ones he had no doubt would always be there to help him. The ones he loved dearly. He loved his brothers and students as much as, if not more than, his own family.

This brother devoted his time and effort to them. He ran to them to help ease any of their hardship he was made aware of. They were the ones who he thought to be his soul or even closer. But as the days went on, they turned away from him. As the entire world turned their backs on him, so too did the brothers and students he thought so highly of. He pleaded they listen and asked his family to contact them — to no avail. The brothers had no mercy on the tears dripping uncontrollably down the cheeks nor the weeping heart aching with pain. They turned their back on him. They lied and procrastinated to the family and made the family feel like a burden. And in the end they disappeared like a mirage leaving the family with no help or hope in obtaining help from any of Allah’s creations.

The darkness in this elderly man’s dark cell became even darker. He felt betrayed and abandoned and thought back to how he would have treated those very same brothers if the tables were turned. Never in his wildest dreams would he have abandoned any of his brothers or students. The more he thought about what he would have done, the more he was convinced that his brothers and students were treacherous and deceitful. This elderly brother found his days with no daylight. He was the imam of a big center. He performed their marriage ceremonies, he buried their dead. He was there for them in their hardships and helped them resolve family problems. By Allah’s mercy, his counseling kept families intact and he helped bring people closer together. And now, they all turned their backs on him, with no exceptions.

I said to him,

Enough ya Shaykh! Enough grief and enough crying. Enough feeling used when WE USED THEM!

For years, when we were there to bury their dead, when we performed their marriage ceremony, when we lectured them, when we held classes for them, when we let them in our houses night after night for lengthy times when we could have closed the doors to them, when we were in our peak and it was in their honor and benefit to be around us, we did it for the sake of Allah and in pursuit of reward from Allah. We never took compensation and we ask that Allah Subhanu Watala accepted it all and insha'Allah put it in our balance of good deeds.  We in return were the winners and they the losers.

He lowered his head thinking.

In addition to the main test we are going through, Allah subhanahu watala tested us with such friends and former students because he wants to teach us not to ask or complain but to Him.

Not to love but Him…

Not to ask but Him…

Not to turn but to Him…

Not to knock but on His door…

Allah wanted us to know that no matter how many friends, students and supporters we had, He was the best, the most lasting one to turn to, the most exalted and complete. He wanted us to know that He will not forsake us, even though the ENTIRE world did; enemies and friends alike. Allah is waiting for our call even though we abandoned Him for so long. He is eager to answer us despite our transgressions and sins.

The one who heals the broken hearts…

The one who gives the oppressed their long awaited victory…

The one closer to you than your jugular vein...

And complain not to those who brushed your family away when you sent them to seek their help.

Why would you need anyone else when you have Allah?

Even though it is a lesson from Allah to teach his awliyaa’ (his friends) to be fully and only attached to Him and only Him just as he took Yusuf from Ya'qub (عليهم السلام) when Ya'qub became overly attached to his son, a lesson scholars of Islam continuously went through.

I was with Hatim al-Asam heading to hajj when we reached Baghdad.

O' Abu Ja'far, let us meet Ahmad ibn Hanbal since we are passing in his town.

We sought his house and headed there.  We knocked on the door and he opened. Hatem al-Asam said,

Imam Ahmad greeted him and warmly welcomed him. Imam Ahmad then asked Hatim,

How can we protect ourselves from the people?

“What are they?!” asked Imam Ahmad.

What caused one of the biggest Imams of his time to ask Hatim, one of the wisest men of his time, such a question and to get such an answer but that they had been betrayed by those close to them. The question came with agony because Imam Ahmad suffered in prison where all but a few who were close to him turned on him during that difficult trial of his life when he was tested and imprisoned.

In 2002, I gave a lecture as the righteous scholars were being rounded up throughout the world and I mentioned how Shaykh Abdul-Hameed Kishk - the eloquent beacon of truth in the 60’s in Egypt - was imprisoned many times, as most righteous scholars are. After every time he was arrested, he returned to the pulpit fiercer than he was before. In the 1980’s, President Anwar Sadat felt threatened and rounded up the leaders of all faiths and all movements. Across from Shaykh Abdul-Hameed Kishk’s cell was the cell of Egypt’s Coptic Pope Shenouda III. Shaykh Kishk said he heard the Pope’s visitors throughout the day and night. They never stopped coming and going, while Shaykh Kiskh said that he did not have a single visitor that inquired about him. When he was finally released, he gave up the pulpit and retired, never again setting foot on that pulpit until he died in sujood (prostration) in 1995.

Keep in mind that Shaykh Kishk’s Khutbah's were not only the most popular khutbah's in Egypt during that time, but his eight track tapes and regular tapes had no competition and were the most widely produced tapes throughout the Muslim world.

When I gave that lecture in 2002, a brother walked up to me and said,

Shaykh, if anything ever happens to you, know I will visit you and be there for you.

In reality he was among the better ones of my former students who did call one time and only one time, when the news broke of my arrest, never to inquire again.

The same scenario was repeated in Kuwait where a famous eloquent khatib in Kuwait was banned for one year from the pulpit for statements of truth he made. Several days ago, I was able to find and contact his daughter and I inquired about her father’s status since that year of being banned was over a decade ago. She informed me that when he was offered to go back to give khutbah's and speeches, he refused due to the lack of support and betrayal of those who never missed a khutbah in his masjid for over two decades before his hard times.

These are duaa’t and khateeb's who definitely – insha'Allah – were doing what they did for the sake of Allah but they are also human and the betrayal or silence of those one would have expected to be there for them in times of calamity is hurtful. The action of such fake students halted the benefit of masses of the ummah. Those may be the lucky ones but what’s to be said about those who took the witness stand to clip a few years off their own sentence and to lie and falsify testimony against their shuyukh because they were not man enough to handle the consequences of what their hands committed, unable to accept the destiny of Allah subhanahu watala. It goes further to blow your mind at those who went on to falsify testimony to please the kuffar and give their shaykh a life sentence in prison.

Those who do not stand with their brothers in times of need are the ones who go into the waste basket of history.

Imam Ahmad, Bukhari, Ibn Taymiyyah, among many others were imprisoned and considered outcasts and lived large portions of their lives in seclusion finding means to spread knowledge and truth. Those who opposed them, turned on them, and stood against them were famous, prestigious and powerful during that time. Their name died or was trashed in history, with their death. If mentioned, they are mentioned in shame whilst Imam Ahmad, Bukhari, Ibn Taymiyyah’s legacy, knowledge, and names lived on.

As for me, I believe what a famous Arabic poet once chanted,

May Allah reward all the calamities the best. As difficult as they may get, I thank it only because it taught me my friend from my enemy!

Allah takes, but He replaces. He replaces better and more solid men and brothers with the traitors, the inconsiderate, weak and the fearful ones with no backbone.

I just find it difficult to understand how they will answer to Allah when they stand before Him.

Jabir and Abu Ayyub reported that the Prophet (ﷺ) said,

Whoever lets a Muslim down at a time when his honor is degraded and his rights/sanctity are violated except that Allah will let him down, in return, at a time he loves/wishes the victory from Allah.  [Narrated by Abu Dawud and at-Tabarani.]

Whoever sees a Muslim being humiliated (degraded or his rights transgressed) and did not give him victory while able to, Allah will humiliate him before all creations on the judgment day.  [Narrated by Ahmad.]

Since the beginning of time, this is something scholars have always struggled with. They get betrayed once they face a hardship even though they had given so much to the very same people who turned on them. It even happens that many not only turn away, but rather turn against! They do that to go with the flow, to please the kuffar and to seek popularity and personal benefit.

It was supposedly narrated that Ali bin Abi Talib said,

You will only know your true brother if he guards you during your hardship, absence and after death.

Islam encourages and puts a great deal of emphasis on brotherhood, yet true brotherhood has become a rarity — like a rare currency or a precious jewel that you cannot easily find.

To those who turned their backs on their brothers during hardship, we cannot deny the bond of Islam amongst us, but you are “forgotten”!!! We turn our backs as you have, and we’ll choose a direction different than that where you are and maybe we’ll find more dutiful brothers. I mourned their death when they fell silent and turned away and it’s hard for the dead to come back.

At the end, we will remember not the words and torture of our enemies, but the silence and betrayal of our friends

May Allah reward all the calamities the best. As difficult as they may get, I thank it only because it taught me my friend from my enemy!