﻿
A Word of Truth on Sayyid Qutb 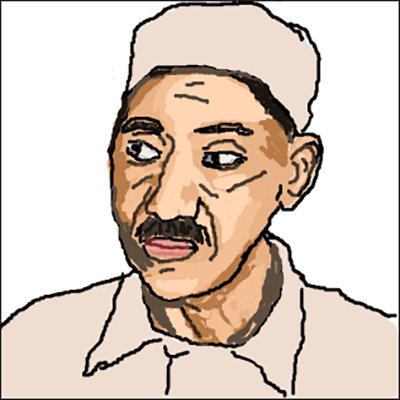 The declarations made about Sayyid Qutb (رحمه الله) have greatly increased, some say he is innocent of any mistakes and some qualify him at the same level as the fornicators among the disbelievers, so where is the truth in this matter?

The reply (of the Shaykh):

Praise be to Allah, the Lord of the Worlds and all the prayers be unto the Last Prophet, to continue:

Indeed, the political thinker Sayyid Qutb (رحمه الله) has a great number of enemies, who differ in their method of criticism and its purposes, and who also share common interests. But before I expose the accusations directed towards Sayyid (رحمه الله) I would like to clarify the reason why Sayyid Qutb is being targeted specifically.

Sayyid (رحمه الله) was considered in his era as a science amongst the knowledge of the people who’s curriculum was to fight the oppressors and declare them as disbelievers. He was also one of the unique preachers who called on people to worship their Lord and who preached the unification of all laws to none other than Allah. He did not bow down under the enemies of Allah and His Prophet, like Jamal Abdel-Nasser and his likes... no one was happier by his death than those. The tolerance of these wrongdoers wore thin; indeed, when they thought they had killed him, he restored his curriculum with his blood and he lit up his words with enthusiasm. He became more accepted among the Muslims, and the distribution of his books increased because he guided with his truth and the boldness of his strong curriculum. They worked on stabbing him again, due to the appeal they had to destroy his curriculum.

The targeting of Sayyid Qutb (رحمه الله) wasn’t just due to his personality, indeed he isn’t the first scholar to commit small mistakes, he has made mistakes that we do not deny. Surely, the goal of his stabbing wasn’t his downfall, he has been sent forward to his Lord and we ask Allah to accept him among the martyrs. Indeed, what still worries his enemies and their followers is his curriculum (minhaj) which they fear will spread amongst the children of the Muslims.

When I hear the backstabbing of Sayyid Qutb (رحمه الله) I am not surprised, because Allah (تعالى) said:

Whoever has inside him a light of prophethood, also has enemies amongst the wrongdoers, in proportion to the heritage he received from our Prophet Muhammad (ﷺ). Indeed, all the backstabbing of the backstabbers does not harm Sayyid, it merely increases his good deeds. What is most surprising is the actions of those groups which claim to be amongst the followers of the truth (various “Muslim” brotherhoods), who surely lack balance (fairness) and who do not use the right scale. Allah says:

So when these people want to praise a person which has been criticized much more than Sayyid, they say their famous words: “His mistakes are dipped in a sea of good deeds,” and another saying: “If the water rises a little, it won’t bring malice,” and others similar. Similarly, If they wanted to slander someone, like Sayyid (رحمه الله) who counts as a renewer (Mujaddid) of faith in the topic of: (إن الحكم إلا لله) All judgements belong to Allah, they tied him to the ways of the Khawarij and they declared him a disbeliever, using sins and mistakes to do so.

We do not claim that Sayyid (رحمه الله) is free of mistakes, surely he has mistakes whose details have no place in this document. They do not affect his preaching nor his curriculum, similarly to how other scholars have committed mistakes which haven’t discredited their ranks, like for example: Ibn Hajar, an-Nawawi, Ibn al-Jawzi and Ibn Hazm. The latter have made some errors in 'aqeedah but which haven’t stopped the children and scholars of the Ummah from benefiting from them or from refuting their truthfulness and denying their virtues, indeed they are Imams except with what they have mistaken about. This is the case with Sayyid (رحمه الله). His mistakes did not strike the roots of his curriculum or his unification of laws to none other than Allah (ruling by what Allah has sent down) and his call on people to worship their Lord.

The rule which is to be decided in cases like these should be benefited from the words of Allah (تعالى) when He says:

They ask you [O Muhammad (ﷺ)] concerning alcoholic drinks and gambling. Say: ‘In them is a great sin, and (some) benefit for men, but the sin of them is greater than their benefit. [al-Baqarah 2:219]

Indeed, whoever accomplishes whatever needs to be accomplished from the original and correct religion (usul ad-deen) afterwards his complete curriculum will be examined, if his mistakes outnumber his right ones and if its evil wins over its benefit, then indeed his sayings must be ignored, his books should be closed and mustn’t be read. Concerning this matter and upon this, the real truth concerning Sayyid (رحمه الله) is that his errors are practically unknown in comparison to his virtues and his defense over “Laa ilaaha illa Allah,” especially since he was able to attain his true original beliefs. If he has committed some minor mistakes, we won’t deny them upon him and may Allah have mercy on him.

In conclusion, nothing remains except for me to say that I consider that Sayyid (رحمه الله) is represented by the saying of the Prophet (ﷺ):

The best of all martyrs are Hamzah (ibn Abdul-Muttalib) and a man who stood before an unjust leader, commanding him to do right and avoid evil, so the leader killed him. Narrated by al-Haakim.

We also count that Sayyid (رحمه الله) has qualified for this rule, which says that he said the word of truth in front of a leader, who killed him for it…and I will say some of his words (رحمه الله) before his execution, when one of the officers was surprised with the happiness Sayyid Qutb showed when he heard about his Shahadah execution verdict and was shocked because he did not sadden or get depressed or collapse, so he asked him:

You think that you will become a martyr, but what does a martyr mean to you?

A shaheed is someone who presents a testament (shahadah) with his soul and blood that his faith and religion is dearer to him than the world. For this reason, he exerts his soul and life in redemption to the religion of Allah.

May Allah give peace and blessings upon the Prophet Muhammad, and all of his family and companions.