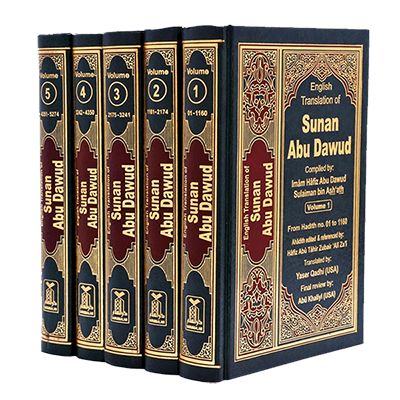 Sunan Abu Dawud is one of the six most authentic collections of Ahadith (Sahih al-Bukhari, Sahih Muslim, Jami' at-Tirmidhi, Sunan Ibn Majah, Sunan Abu Dawud, and Sunan an-Nasa'i). It has 4800 Hadith (selected from a mass of 50,000) divided into many different subjects, each section containing many Hadith. The numbering system used by Abu Dawud is consecutive and uninterrupted for the entire collection.

Statements About the Author and His Book

The book of the Sunan, by Abu Dawud, is a noble book, there has not been another book written in the knowledge of the religion that is like it.

I heard Ibn al-'Arabi say - while we were listening to him (recite) this book; he pointed to the copy which was in front of him - 'If a man does not have any knowledge with him, except that of the Mushaf in which is Allah's Book, then this book, he would not have a need for any knowledge at all beyond the two of them.

Abu 'Umar Muhammad bin Abdul-Wahid az-Zahid - the companion of Abul-Abbas Ahmad bin Yahya - informed me, he said: 'Ibrahlm al-Harbi said: "When Abu Dawud wrote this book, Ahadith were made supple for him, just as iron was made supple for Dawud." Meaning the Prophet Dawud, peace be upon him.

Along with his Imamat in Hadith and its fields, Abu Dawud was among the major Fuqaha', for his book proves that. He was among the distinguished companions of Imam Ahmad; he attended his lessons for a lengthy period of time, and he asked him about delicate issues, in both branches (Furu') and fundamentals (Usul), and he stayed upon the Madhab of the salaf, regarding following the Sunnah and submitting to it, and not delving into problematic Kalam.

Those Who Narrate His Sunan

There are many who heard Abu Dawud's Sunan from him, those that are popular, or known to have reported it from him, are; Al-Lu'lu'- (Muhammad bin Ahmad), Ibn Dasah (Abu Bakr Muhammad bin Bakr bin Muhammad), Ar-Ramli (Abu Isa Ishaq bin Musa), and Ibn al-A'rabi (Abu Sa'eed Ahmad bin Muhammad).

The most famous of commentaries on the Sunan of Abu Dawud is that of al-Khattabi. He is Abu Sulaiman Hamd bin Muhammad bin Ibrahim al-Khattabi al-Busti. He heard from the previously mentioned Abu Sa'eed Ibn al-A'rabi in Makkah, and Abu Bakr Ibn Dasah in al-Basrah, as well as other scholars. He died in the year 388 after Hijrah.

There are many other commentaries written for the Sunan, some of them published and others not yet published. Among them, that of al-Mundhiri, who compiled an abridgement of Sunan Abi Dawud with comments, Ibn Qayyim al-Jawziyyah, who compiled comments on an abridgment of the Sunan, as-Suyuti, al-'Aini, and Abu al-Hasan as-Sindi. An-Nawawi, also compiled a commentary which they say was not completed, and it is among those that are lost.

The most famously cited commentary today, is that of al-'Allamah Abu Tayyib Muhammad Shams al-Haqq al-Azimabadi, entitled; 'Awn al-Ma'bud. This work contains comments taken from his larger collection, entitled: Ghayat al-Maqsud, some of the larger collection is published.

His Objectives and Criteria

Regarding the level of narrators he included in his Sunan, Abu Dawud said:

There are no abandoned (Matruk) Hadith narrators in the book of as-Sunan which I wrote, and when there is a Munkar Hadith I clarified that it is Munkar, and there is nothing other than it which is similar for that topic.

And the meaning of Munkar is an odd narration, whose narrators are disparaged.

And, he mentioned about the weak Ahadith in his book:

Whatever Hadith there is in my book that has a severe weakness, then I have clarified it, and whatever I did not mention anything about it, then it is Salih (good), and some of them are more correct than others.

It is clear from its context, that some of the Ahadith not clarified by him are weak, while he did not consider them to be severely weak.

I wrote, from Allah's Messenger, five-hundred thousand Ahadith, selecting from them what I included in this book - meaning the book as-Sunan - so I collected four thousand Ahadith in it, mentioning what is Sahih, and what resembles that, and what is close to that.

Abu Dawud narrated weak chains of narration when he did not find anything else for the topic, because that is stronger to him then a man's opinion.