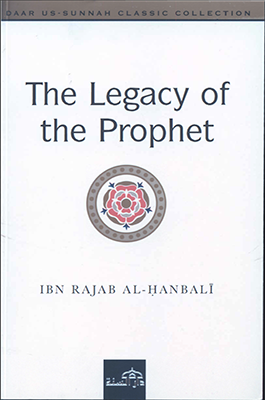 The Legacy of the Prophet

In this treatise, the author, ibn Rajab sets out to explain the advice the Prophet (ﷺ) imparted to Ibn Abbas (رضي الله عنهما), 'Safeguard Allah and He will safeguard you. Safeguard Allah and you will find Him in front of you. Know Allah in times of ease and He will know you in times of hardship. When you ask, ask Allah. When you seek aid, turn to Allah. The Pen has dried (after having written) all that will occur...'

It would not be an exaggeration to say that if a Muslim was to understand this hadith and follow it closely, he would be well on his way to fulfilling the goals highlighted above. It is for this reason that ibn al-Jawzi said, 'I pondered this hadith and it struck me with awe; I was so astounded that I almost became light headed... The prevailing ignorance of this hadith and the lack of understanding thereof is truly distressing!'.

'Abdu'l-Qadir al-Jilani said, 'Every believer should make this hadith a mirror to his heart, his axiom, his shelter and his topic of conversation. He should act by it in all times of motion and stillness so that he can be saved in this world and in the Hereafter.'

Imam Ibn Rajab al-Hanbali (d.795H) was a scholar praised extensively for his vast knowledge, ascetism and expertise in the Hanbali school of thought as well as in hadith and its related sciences. His writings, gatherings and sermons were full of blessings and he was loved by all. He has written numerous monographs explaining individual hadiths of which this one, a series of which is currently being published by Daar us-Sunnah Publishers.

The translator has added appendices which comprise further explanations to the hadith by Mulla Ali al-Qari, ibn 'Allan, and ibn 'Uthaymin.