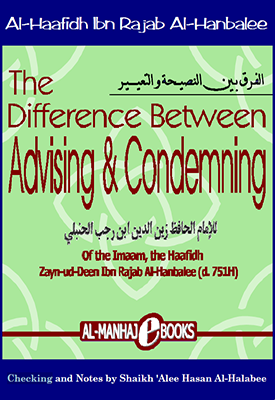 The Difference Between Advising & Condemning

In this classical treatise, Ibn Rajab (may Allah have mercy on him) discusses the differences between advising and condemning, which is an extremely important topic since it is very common that the two are confused for one another.

For the most part, his talk revolves around the dealings and affairs of the scholars, and how it was from their way to advise and accept the truth from one another. And he shows how condemning was not from their characteristics, but rather from the signs of the evil and wicked people who held hidden goals and objectives.

This book is especially important in these days due to the wide scale confusion that exists on this subject amongst the Muslims. So today when we find scholars of the Sunnah refuting weak opinions of other scholars from the past, they are quickly accused of hating those scholars of the past and just condemning them, when in fact they are really advising the ummah and warning the Muslims against following a man in his error.

So, we hope that these matters become clear to the reader upon studying this treatise and that he is able to distinguish those who are truly advising from those who are just condemning.