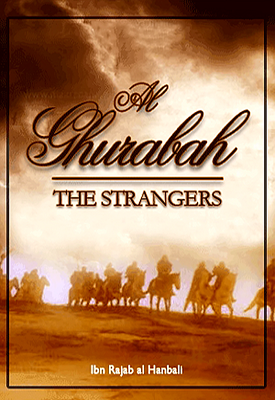 Alleviating Grievances in Describing the Condition of the Strangers

This book is a translation of a short treatise entitled “Kashf-ul-Kurbah fee wasfi Haali Ahlil-Ghurbah” [Alleviating Grievances in Describing the Condition of the Strangers] written by the great Imam, Al-Hafidh Zayn-ud-Deen Ibn Rajab al-Hanbali, may Allah have mercy on him.

In this treatise, Ibn Rajab discusses the topic of the “Strangers”, listing the many ahadeeth of the Prophet reported about them. They are given this name because they will be strange during the Last Days, due to their adherence to the Sunnah and to the Way of the first Muslims, the Salaf as-Salih. So just as those who first accepted Islam at the hands of Muhammad were considered strangers to their families and close ones, then indeed, those who adhere to the Sunnah in the last Days, when innovations and misguidance are rampant and widespread, will also be considered strangers to their families and close ones, not to mention the disbelievers.