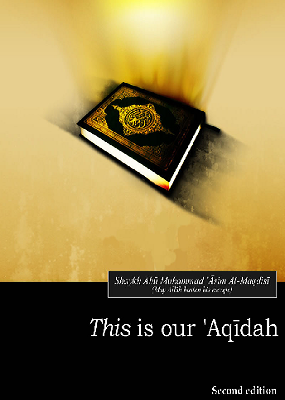 This is our Aqidah (2nd Edition)

“This is our ‘aqidah” . Whoever possesses two eyes then let him read and whoever possesses hearing then let him listen!” All praise is for Allah, the Lord of the worlds, the Most Compassionate, the Most Merciful, the Master of the Day of Judgment. May the salah and the salam be upon the seal of the Prophets and Messengers and upon all of his family and companions. To proceed: This is a summary of what we believe in and what we worship Allah with from the most important areas of the deen . I wrote it in my jail cell after it had reached me that there were some people who were ascribing things to us and putting words in our mouths that we have never said; in particular, in the areas of kufr and iman . Before this, I was never concerned with writing about the likes of this subject. That is because our scholars have sufficed and fulfilled in that.